The second week of September I spent four days in Stockholm, despite having lived here before returning as a vegan meant I was discovering the city anew. It is nothing short of a vegan paradise and my friend I were not short on eating options.

This is a beautiful city in which the old easily amalgamates with the new in fashionable and breathtaking ways. And with excellent public transport everything is essentially on your doorstep. Unlike my trip to Marmaris in Turkey last month, Stockholm has largely embraced veganism with many eateries catering to a plant-based diet.

So this is my What I Ate in Stockholm along with some touristy information. I hope you enjoy.

We arrived in Södermalm on Monday afternoon tired and hungry. On the go from about 5 in the morning I was in dire need of a strong cup of coffee and some snacks. Despite the fact we were going to have dinner with a friend of mine that evening, it was still a few hours away. Enter: The McVegan. That’s right, the McDonald’s vegan soy burger that is currently available Sweden and Finland.

It was somewhat akin to the heavens opening accompanied by a chorus of angels singing. It was a damn good burger. Not to mention my first McDonald’s trip in a long time that wasn’t just fries and BBQ sauce.  I was floored that McDonald’s had an actual vegan burger and sweet potato fries!

After we had eaten our McVegan we decided to go for a walk around the city before dinner. This was probably a good idea because we needed to walk off at least some of the McDonalds...

We ventured back into Gamla Stan to meet my friend for dinner which was a trip to the vegetarian buffet Hermitage. Thankfully that night it was all vegan and was so good even the non-herbivore members of our party enjoyed it. I pretty much loaded my plate with everything and went back for seconds. Potatoes, falafel, a spicy stew and rice. Amazing how much you can eat even after McDonald’s! Plus it was only about 140SEK which is incredible value by Stockholm standards.

On the Tuesday we came across Sattva Naturbageriet, an almost all-vegan cafe. I nearly died when I saw the vegan kanelbuller. Seriously. They were my one true love when I lived in Stockholm and I haven’t had anything close to a cinnamon bun in about eight or nine months.

We sat outside on the streets on Gamla Stan surrounded by picturesque buildings and beautiful people walking past looking effortlessly chic, enjoying cinnamon buns and coffee. This was the life. No wonder that was where we ended up for breakfast every morning. I mixed my order up a bit with vanilla and banana croissants and chocolate croissants.

After breakfast we walked about the city taking in the sights. We stopped by a few churches and came across a man playing Despacito on drinking glasses. Eventually the stomachs started rumbling and we ended up in Max’s. Not one but two fast food outlets with vegan options! Max’s vegan BBQ vegan burger is made with Oumph. If you find yourself in Stockholm city and hungry it’s worth a stop, but I think McDonald’s McVegan is better.

One of the more intriguing options on HappyCow was Lao Wai, a vegan Chinese restaurant in Luntmakargatan not far from Rådmansgatan tunnelbanna. This is definitely a stop on any itinerary in Stockholm although a bit pricey (each main course was around 230SEK). We ordered two mains between us: Zi Ran Su Rai, Xi'an spicy soy fake meat dish. The second main was Ma Po Dou Fu a Sichuan tofu dish. Both were spicy with great textures and we left the cosy restaurant feeling full.

What was for dessert? The much coveted vegan Magnum ice cream! We picked them up in a local 7-Eeleven and quite like the morning trip to Sattva Naturbageriet the magnums became a daily ritual.

Once again the morning started with pastries and coffee in Gamla Stan and then turned into something of a nostalgic day. Although the place where I studied for a year in Stockholm moved around the corner, it was still emotional. Two years ago I was invited to speak on a panel at the opening conference of the new school so I feel like I got to be a part of this new venture.

Walking in to greet former mentors and meet the new generation brought a wave of memories in of itself. But then we ventured out of the city centre and into the quiet suburbs to my old neighbourhood: Huddinge. We got off the pendeltåg and slowly meandered into the centre where I begrudgingly used my card to pay for a public bathroom (on one hand I'm outraged that public bathrooms charge but on the other hand amazed that you could pay with card).

The yellow and red houses whizzed past us on the bus to my old street. It seems almost bizarre to say but even the houses that have sprung up around my former house over the years didn't blight the picturesque view. I have to admit there's something about Swedish neighbourhoods that seems just so... perfect? At least when I lived there I got the opportunity to have my bedroom beside horses. It felt surreal to be back, it was still familiar and comforting.

Seeing my old house was the beginning of our walk to the Gömmaren lake, one of the most beautiful views in Stockholm way off the beaten tourist track. Somewhat secluded, the lake is part of the Gömmaren Nature Reserve and anytime I ever went we usually had the place to ourselves save one or two explorers.

Lunch was bananas and apples, the snacks of travelling vegans, with this amazing view. It was pretty windy but who cares when you see this lying on rocks? After relaxing and munching we set off on a walk around the park. It was fantastic to take some time away from the busy underground and streets and just be with nature.

Of course after such a long walk we were pretty hungry - so bring on dinner! I wish I could be fabulous and say we had a luxurious vegan meal in a posh enclave of Stockholm, but we were starving and the first thing we saw was McDonald's. Another McVegan. Don't judge me because I regret nothing. If it makes it any better, I did have sweet potato fries? One of your five a day!

After we stuffed ourselves and I managed to hold down a conversation in Swedish we uncovered something of a vegan treasure trove. My local supermarkets aren't exactly a smorgasbord (see what I did there) when it comes to vegan options; we're still squealing with excitement over the recent releases in Iceland. But Coop! Oh Coop (no, not the Co-Op) you showed me what life could be like. Meatballs, ham, cheeses - the list goes on. 'Välj Vego' (Choose Vego) was displayed prominently, and all I wanted to do was pack my bag with all that lay before me. 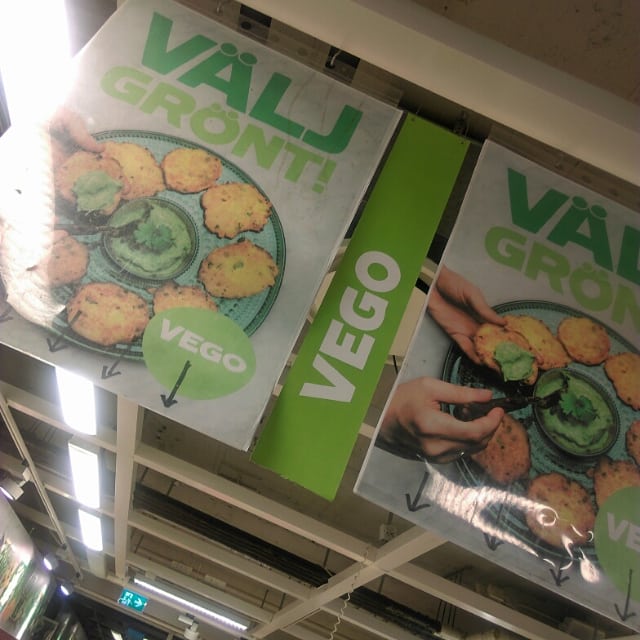 The final morning. Reality was setting in that I was leaving this wonderful place and about to return to the humdrum of my life. What would help? Cinnamon buns!! Of course we went to our favourite breakfast spot. The manager was so happy to see us again, this time he gave me a plate and tongs and told me to pick my own. Talk about being trusted. He even gave us a free pie afterwards!

After a semi-emotional breakfast we wandered through the streets towards Slussen to get the boat to Djurgården. That's right folks - a boat. If you ever visit Stockholm you can buy an SL card that gives you unlimited travel throughout the city and it includes a boat! You jump on at Slussen and it isn't long until you're greeted by a theme park on Djurgården.

This area is full of museums including The ABBA Museum and one devoted to alcohol.  We chose to go to the Nordiska Museet which was displaying Nordic life from the sixteenth century onwards.

Some of the highlights of the museum were the late medieval and early modern dinner settings, some definitely not vegan but historically important nonetheless. There was also a display of various fashions including women's professions in the 1950s and 1960s. But my personal favourite? The 1940s flat. You could walk into a replica of a war-time flat and it was such a cool feeling, there was even a "balcony"!

Obviously the kitchen was the most exciting part. The cupboards were full, the cutlery in the drawers and there was even a cut out of recipes from a contemporary newspaper. I loved, loved loved a feature under the cupboards for storing seeds and flours that I'm definitely going to appropriate if I ever have my own home.

As it was the final night, the Last Supper, den sista natten, it was thankfully not another McVegan (although I wouldn't have been against that). One of the other recommendations that came up on HappyCow was Herman's, a slightly pricey but highly rated vegan buffet overlooking the sea.

We piled up our plates and sat outside looking at the view. Lord knows when I would see it next. Anyway I digress... I've noticed that since becoming vegan my tendencies of being a 'fussy eater' have virtually disappeared. If it's vegan it's going on my plate, to be blunt. This is another must-visit on your Stockholm agenda. The food is delicious, there's water and a variety of teas (and a student discount with a valid student card). Two plates later I was ready to sleep. Which was a good thing because I had to be awake at 4am the next morning.

So there we have it: my Stockholm vegan diary with the odd bit of tourist info. Returning to this city felt like going home, and I can't wait to go back again. There were quite a few more vegan eateries that we didn't get a chance to visit which just means I have more research options the next time I'm there.

Vegan food, because  it's delicious.

Lifestyle, because it's about more than what we eat.